Von Briesen and Roper is a Wisconsin-based law firm with a regional, national and international practice founded in 1904. Located on the 10th floor in the 411 Building of downtown Milwaukee, the firm’s 150 lawyers serve local, regional and national clients through offices in Milwaukee, Waukesha County, Madison, Oshkosh, Green Bay and Appleton.

The von Briesen management saw an opportunity to advertise their firm using some available space on the exterior of the building at the 17th floor of the 411 Building in downtown Milwaukee, a vertical distance of 200 feet. Signage at this height would be visible from the nearby I-94 corridor, from the western end of Wisconsin Avenue and much of the surrounding downtown area. 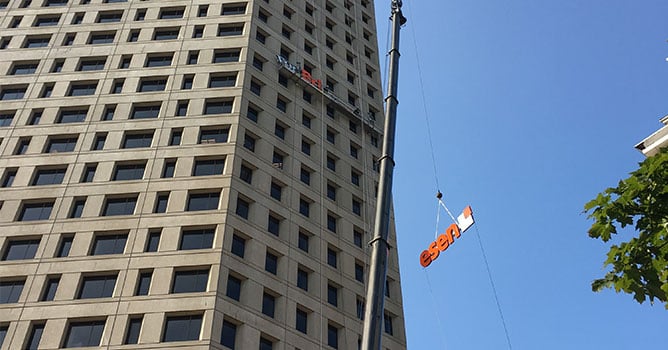 Lemberg Signs and Lighting was contracted to design signage that would make an impact from the north and west facades of the building. The team was challenged by limited architectural drawing of the building’s pre-cast structure. Without it, they had no indication for the location of reinforcing bars (rebar) contained in the exterior walls. They were also concerned about the distance from which the sign would be viewed, the traffic at the installation sites, and the busy downtown summer event schedule.

The Lemberg sign design team was concerned about how the von Briesen brand colors – orange and gray – would appear from the street level. The concern was that the gray would appear too dull. Two options were considered: swapping the gray for a bright white and using LED lighting, the preferred method of illumination in signage today.

Though the lettering at its tallest was 5 feet and large enough to be lit with fluorescent tubes, the placement of the signs, the expense and difficulty in reaching them for servicing dictated the need for the most reliable and longest lasting lighting solution. Though like any other bulb they still need to be accessed from the outside of the building, LEDs were recommended for their tremendous life-span and because the power supplies that drive the lighting of the LEDs are contained inside the building.

The team invited the von Briesen group to the Lemberg warehouse to view a lit sample sign done in the brand orange and gray colors. Lemberg recommended a white rather than the gray for the lettering. As much as both teams wanted to maintain the brand, they chose the white letter faces for a brighter sign.

Given the lack of architectural drawings of the building, a radar technician was enlisted to scan the building and locate embedded materials to avoid striking rebar when installing the sign anchors.

The installation of the channel letters took place during the busy downtown Milwaukee summer festival season. Additionally, the groundbreaking construction of the Milwaukee Street Car was well underway. Together with the city planners, Lemberg’s installation team secured the installation site from both vehicular and pedestrian traffic using street closures, detour signs, barricades, and caution tape. To keep the impact of the installation minimal to city traffic, the installations took place over two weekends. The team was vigilant in keeping curious passers-by from breaching the work site boundaries.

The installation site was 200 feet above the street and required a 40-foot swing stage to be in place to allow the installers as well as the radar technician to scale the building and have a work platform to install the 36-foot long sign. Following OSHA standards, the teams were secured with safety harnesses and fall protection. The radar tech located the rebar, Lemberg drilled into the concrete walls to install the sign anchors. A crane was used to lift the sections of the sign to the installation site so that installers could steer them into place and secure them to the building.

To complete the installation, a team of professional designers, engineers, fabricators, project managers, crane operators, and installers pooled their talents to realize the von Briesen vision in a matter of months.

Before this installation, the signage for von Briesen consisted of two small box signs attached to the 411 Building soffit at street level. Today, the new illuminated von Briesen logo is large, bright and seated hundreds of feet above the street, significantly increasing the exposure of the firm’s logo in the city and giving the downtown Milwaukee skyline a punch of color. 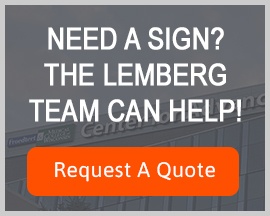 Find out what it is like to be 17 stories up on a swing stage. 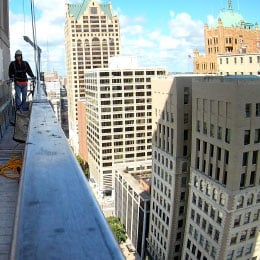