Your relationship with your hard hat should be a short one.

Throughout our 90th Anniversary year, we realize that the one thing that remains constant is change. From leadership and staff to our building and equipment, change requires us to be agile, innovative and sometimes simply compliant.That's especially true of the safety staple -- the hard hat. 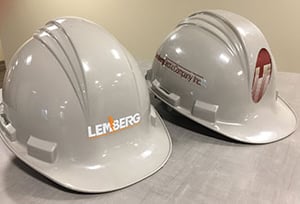 Believe it or not, hard hats do expire. Just like any piece of equipment, safety equipment is consistently being upgraded as technology and materials get better. Located on the inside of your hard hat should be a manufacturer-stamped date which will be the date the hard hat was molded. Quick math tells you how long you should keep your trusty skull bucket.

General consent states that hard hats should be replaced every five years. It is recommended that the suspension system be replaced even more frequently. And, if you’ve been lucky enough to have been “saved” from injury by your trusty protective head gear, then it is time to retire it and get a new one. Hard hats struck by any force blow or that show signs of wear or damage should be replaced without exception.

From canvas to high tech

The hard hat can be dated back to 1915 and a man named Edward Bullard, who was inspired by steel military helmets of World War I to create a safety helmet for gold and copper miners and shipyard workers. These early hats were crafted of canvas, resin and varnish. Hard hats were the required safety gear as early as the 1930’s during the building of the Hoover Dam and the Golden Gate Bridge. 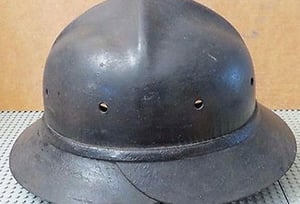 Hard hats evolved over time from steel and canvas to aluminum in the late 1930’s to fiberglass in the 1940’s and thermoplastics in the 1950’s. This image at right shows an example of a typical steel hard hat from the 1930’s [image courtesy of ebay.com].

Today, hard hats are required across the trade industries and are made from high-density polyethylene (HDPE) that is strong, lightweight, and easy to mold. They are also rated for impact and non-conductivity and flammability. They even have ANSI (American National Standards Institute) approved popular accessory features like face shields, ventilation holes to keep workers cool, lights, audio headsets for clear communications, cameras and even a variety of decorative options – like sports team logos.

But, why a hard hat at all?

Hard hats protect your head in two ways. The hard shell protects against penetration and the suspension system spreads the blow across a wider area, lessening the consequence of the blow of top or side impacts. They can be very effective in saving lives.

According to OSHA, there are some practices that can hinder the protection of a hard hat.

Lemberg field technicians follow standard safety protocols including wearing hard hats while on the job. Our Safety Director holds several training sessions each year to address this and other safety concerns and updates.

Have questions about safety? Leave your question in the comments section below and our safety director will be happy to provide an answer!