In 1950, the United States was different. Harry Truman was president. Cyrano de Bergerac was playing in theaters, Bing Crosby was crooning on the radio, Groucho Marx was host of "You Bet Your LIfe," and Jack Benny, Frank Sinatra and George Burns were entertaining America with their television talk shows. But there was something else happening quietly in Milwaukee...

In Milwaukee in 1950, Lemberg Electric Company was steadily growing and celebrating 22 years in business. We found a window envelope sent from Lemberg Electric with a date stamp of November 16, 1950 and a Thomas Jefferson postage stamp that cost a mere three cents. 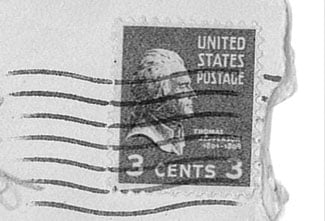 The price to send a United States Postal Service (USPS) first class letter hadn't changed since 1938. It would be another 20 years before the price of postage rose again, this time to four cents in 1958.

The return address was 2324 W. State Street, Milwaukee 3, Wis. There was no zip code and the state abbreviation was still three letters. Two letter state abbreviations were implemented in October 1963, the same year that the USPS implemented 5-digit zip codes. Since then, the only change  to the abbreviations has been that Nebraska went from NB to NE in 1969 to avoid confusion with Canadian New Brunswick.

PS. We know we're guilty of note taking on paper scraps like old envelopes. How about you?