The heat of summer gave way to an early cool in the fourth quarter of 2019, when Service Managers Tim Hagen and Matt Schmidt continued their way to their goal of hiking the entire 1000 miles of Wisconsin’s Ice Age Trail (IAT). Hagen hit his 300-mile mark in October and Schmidt, who began his goal a few hikes behind Hagen, hit his 100 miles in February 2020. The decent into the deep freeze of winter would mark another milestone, one that no one saw coming.

The Cool Slide into the Wisconsin Winter

After a long hot summer, the battle of the insects was finally over. The team trekked nearly 55 miles through Kewaunee and Door County in mid-October, enjoying cool, crisp weather. Logging their longest single day hike – 16 miles -- along the Kewaunee River Segment of the trail, Hagen and Schmidt enjoyed their hike with NO BUGS. 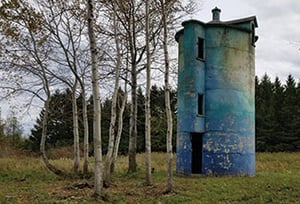 But in the last few months of 2019 in Wisconsin, the insect battle was replaced with another battle – a weather battle. On their second day on the Kewaunee River segment, Mother Nature teased our hikers with threats of impending rain. With temperatures in the 30’s, Hagen and Schmidt kept an eye on the skies during their 14 mile hike. They were lucky to escape a drenching by mere minutes.

After a few weeks break, the team tackled an unrelenting section of the Door County section of the Ice Age Trail. A light dusting of mid-November snow frosted the section which followed an old railway winding through the Forestville area. Forestville is a small rural town nestled in the middle of the green countryside known as the “door peninsula.” Along the way, they took in the old mining town of Maplewood and traipsed through about a 4-mile unbroken stretch of swamp spanning the space between Forestville and Maplewood.

Hagen and Schmidt continued north along the IAT through the center of Sturgeon Bay and further on, along Lake Michigan and into Potawatomi State Park, encountering more semi-frozen waterways. Still, these are treasures of nature as are the forests of cedar and birch that surrounded them as they hiked along the bay and the hardwoods that stood further from the shore. Trees of all kinds drift off to dormancy as Wisconsin’s winter settles in, the serenity of time held in their rings.

Winter Hiking: A Feat for the Feet

Hagen and Schmidt resumed their hiking after a brief holiday break. They made their way through Manitowoc County, which lies south of Green Bay and north of the Northern Kettle Moraine, and stretches from the shores of Lake Michigan inland through patch-worked farmland about halfway to the big Lake Winnebago. With the connecting routes, and the Mishicot, East Twin River, and Tisch Mills segments completed, the pair linked Janesville to Sturgeon Bay along the IAT. 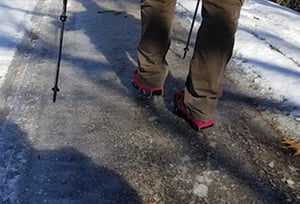 Hagen and Schmidt enjoyed comfortable stretches along easy-to-trek roadways. But those stretches were balanced by nearly 6 miles of challenging heavy slush and cut cornfields. The challenge didn’t stop there. Portions of the IAT that wound along the East Twin River were swampy and snow covered but not entirely frozen. The footing was icy and unstable. The snow masked the inconsistency of the ice, meaning wet feet when the ice unexpectedly gave way.

By February, the team was dried out but tackling 16 miles of Rock County amidst the threat of rain again. Schmidt reached his 100-mile mark on the hike, but Hagen had less to celebrate, given he was breaking in new boots. Or, maybe we should say the boots were breaking him! He dubbed this stretch of the IAT, “The Blister Tour.” Ouch!

The weather in February proved to be a challenge as the team set out on Leap Day in low temperatures. The day began at 10 degrees but managed to climb to a comfortable 36. After a fairly easy 6 miles of road trail, Hagen and Schmidt once again found themselves in more challenging territory.

The IAT traversed an old railway that was iced over. It was a 9.4 mile stretch of frozen hell that required crampons. Crampons are metal spiked “shoes” that fit over hiking footwear to help secure footing on ice and snow. They do the trick but they are hard on feet and legs. That’s a third “ped-icament” for our hikers in 2020. But at least the skies were clear!

Spring and winter began their battle in March, when Hagen and Schmidt hiked through Green County, just south of Madison and west of Janesville. A gloomy start bloomed into a sunny, “balmy” Wisconsin 38 degrees. The pair hiked the IAT’s Monticello and Brooklyn wildlife segments as well as the connecting route, adding nearly 14 miles toward the Ice Age Trail Thousand Miler Club goal. Yet, the wildlife most prevalent on this stretch was of the human kind. 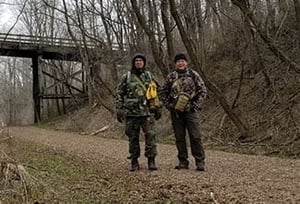 This hike occurred just after the University of Wisconsin system announced suspension of all in-person classes and Wisconsin’s Governor Tony Evers ordered all schools to close due to the novel corona-virus pandemic. The team saw 21 hikers on this March 15th hike -- unusual given that they usually see no one.

This would be the last trip they’d take until the lifting of the unprecedented measures to control the virus, including a stay-at-home order and shutdowns of all state parks, businesses and gatherings of all kinds.

Spring on the IAT passed quietly as Hagen and Schmidt paused their hiking and waited through the uncertainty. It would be May before they’d see the trails again.