A "Jack-of-All-Trades" in the Trades

Electrician, rappeler, bucket lift driver – just about any imaginable journeyman job title, Eric can claim as his. He primarily works for the sign division but supports all five divisions on a variety of tasks – from assisting with data communication electrical work to operating a bucket truck at great heights. Eric takes pride in all that he does. 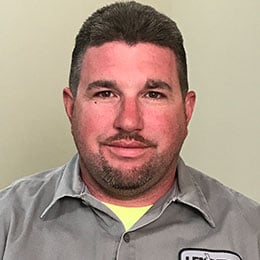 Prior to his journey with Lemberg, Eric was accepted into the apprenticeship program in high school and dabbled in work at a few other electrical companies throughout the Milwaukee area before he landed at Good Electric. Lemberg acquired Good Electric in 2010 and he is proud to say that he has remained loyal to the company throughout its progressive growth and transformation.

Motivated to succeed with an honest mindset that there would be challenges along the way, Eric was eager to acquire as many hours as Lemberg would offer him. He applied the skills that he obtained throughout his first years as an apprentice to take on some smaller electrical tasks between larger jobs.

Eric mentioned that Lemberg has been good to him since the beginning. While he was seeking more hours as an apprentice, the Lemberg team knew that Eric was the right guy for even greater work – high voltage wiring. Live line work requires great knowledge of electrical components, keen spatial ability and strong familiarity with the safety regulations that come with the job – certainly not a task for everyone. Finally, during his fourth and fifth years as an apprentice he moved over to the power plant performing even more elaborate electrical work.

“Eric is meticulous, dedicated and very customer service oriented,” says Sign Division Manager John Wachniak. “As a licensed electrician he trouble shoots issues in the field in order to get Lemberg’s customer up and running, he’s a unique asset to the team.”

After a five-year ride, Eric could call himself a journeyman, partial foreman and bucket truck driver at just 23 years old. Eric did not just seek hours, he aimed to excel in all areas at every task that he was given which is what brought him to where he is today. Ever since, Eric has enjoyed the variety of work that Lemberg has to offer.

When asked what he enjoys the most, he simply stated, “I like the challenge that each new day can bring and – most importantly – the chance to make someone’s day every time I am out on a job.”

“I like the challenge that each new day can bring and – most importantly – the chance to make someone’s day every time I am out on a job.” -- Eric

A humble response from a man with many remarkable skills.

The variety of tasks that Eric opportunely conquers are not those that just anyone can take on. Being a jack-of-all-trades in the electrical industry is undoubtedly not easy. A future journeyman must have the spatial ability to envision an outcome before it is even on paper. Mathematical and analytical skills are important in creating this vision to not miss any important details. Once an idea is developed and advances into a project, the need becomes even more prevalent.

According to Eric, transforming an idea into a project is very fulfilling. In his opinion, the projects are the most fun when he gets to work from his very own “office.” No – not your standard 8’x8’ cubicle, but a 2’x3’ bucket just big enough for one person, lifted up to 61’ feet in the air – definitely not a typical view from what many of us know as our office.

Although it is not a requirement of a journeyman, Eric is certified in rappelling. He says that it is vital to be good with heights, but you also have to be prepared to do some decision-making and troubleshooting while rappelling off of a building or stationed in a bucket truck.

“Electricians do a little bit of everything, from taking service calls to creating blueprints – or working from the side of a building,” he said.

Another side note from Eric – unpredictable weather is to be expected, so journeymen should begin each day with an open mind and a positive attitude to be successful in any task that they are given under any circumstance.

When asked what the next five to ten years might look like, Eric said that he sees himself continuing his growth at Lemberg, specifically installing signage from his “office.” While we’re busy enjoying the view from down here, Eric envisions himself applying his unique skill set, taking pride in his work from a bucket truck for many years to come.